More innovation is needed in the global energy transformation.

Say you’re a member of the world community and a signee committed to the Paris Agreement’s long-term goals. You’d probably want to track your progress and assess your results.

You’d essentially be asking, “How well is the human race doing in its quest to transform its energy mix away from polluting sources?”

The answer is not so well, according to a new report from the IEA, Tracking Clean Energy Progress 2017, which looked at 26 technologies and their performance in meeting the 2°C Scenario (2DS) in 2025. (The 2DS is defined as “an energy system pathway and a CO2 emissions trajectory consistent with at least a 50 percent chance of limiting the average global temperature increase to 2°C by 2100.”)

Only three of the 26 technologies are on track to meet that goal, while eight are significantly off-track and will need strong policy corrections to hit the 2DS.

The bright spots are:

Somewhere in the middle: 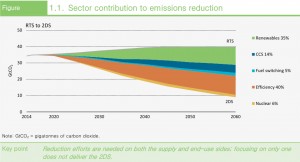 For those countries remaining in the Paris Agreement, this type of tracking lets the community assess its progress and allows legislators to focus on technologies that are actually growing and making an impact. The report’s findings are sobering, but also show that there is still time to correct the course with purposeful legislation and massive focused investment.