Renewables Are Expected to Dominate Global Power Generation by 2040

And attract more than $7 trillion in the process, Bloomberg New Energy Finance predicts.

That’s the upshot from Bloomberg New Energy Finance’s latest installment of the annual New Energy Outlook report, which models the global energy mix out to 2040. The authors predict renewables will capture 72 percent of the $10.2 trillion spent on new generation in the next 23 years, and will produce 51 percent of global power generation in 2040.

That’s the global average, which means in certain places, zero-carbon penetration will be even higher, explained lead author Seb Henbest. All renewables will supply more than 80 percent of power in Mexico, Chile, Brazil and Italy, for instance. Solar and wind alone will produce more than 50 percent of generation in Australia, Germany, Mexico and the United Kingdom.

In just the next five years, large-scale solar will be cheaper than new coal plants in essentially all major economies.

“The cost declines that we are seeing with these technologies are so steep that it becomes a matter of time as to when they start crossing over and becoming competitive in different ways,” Henbest said of solar, renewables and lithium-ion batteries. “These things are getting cheaper faster than we thought even a year ago.”

BNEF models the future generation mix based on system costs, without trying to predict policy interventions. The projection doesn’t depend on governments implementing their Paris Agreement commitments on decarbonization; it’s a calculation of which sources will offer the cheapest power at that time.

Subject to those rules, the global fuel mix looks substantially different by 2040. Wind and solar will supply 34 percent of generation globally; add in the other renewables and the number goes to 51 percent, Henbest said. Nuclear will stay pretty much flat at 9 percent, coal will drop from 37 percent in 2016 to 22 percent, and natural gas will supply 16 percent.

The share of gas actually goes down from 23 percent in 2016, but the overall load will grow 58 percent, so the absolute demand for gas will increase.

This shift amounts to a dethroning of coal: BNEF predicts 87 percent less coal power in Europe and 51 percent less in the U.S.

Even China, which currently has an ample pipeline of coal plants to be built, will see peak coal usage in 2026. Not coincidentally, that’s when the report predicts global power-sector emissions will peak and start to decline. Reducing emissions enough to stave off climate change, however, will take even more clean energy investment than is expected. 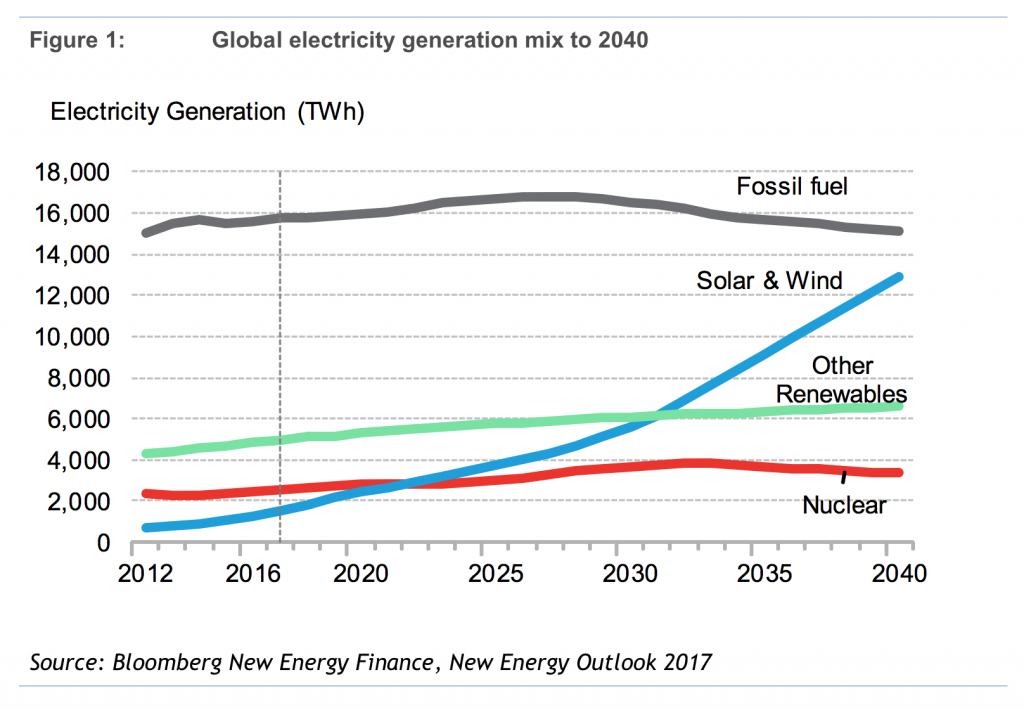 A key factor in the accelerating pace of clean energy deployment is how fast the industry improves over time.

Analysts track this process with the learning rate, which is how much the cost comes down when production capacity doubles. Last year, BNEF’s learning rate for solar modules was 26.5 percent, but the team had to bump that up to 28 percent this year, Henbest said.

Even if conventional plants don’t run all the time, Henbest argued there is value to having some of them around to deliver when solar and wind run low.

The rise of intermittent renewables will place a new value on flexible, dispatchable generation. As renewables, with minimal operational costs, start to outcompete conventional plants for cheap energy production, they will undermine the current system of pricing the market based on how much it costs to produce power.

The implication of these trends is a grid where wind and solar do much of the energy generation, while some combination of incumbent coal, gas, hydro and nuclear earns money delivering backup capacity as needed. Advanced energy storage and demand response will likely play some role as well.

“At this point in time, it’s cheaper, we think, to use the existing fleet to help you balance than it is to retire the fleet and build lots of batteries or try to engineer it up from scratch,” Henbest said.

BNEF models the role of nuclear based on the current project pipeline, but does not factor in potential next-generation capacity additions like small modular reactors. The modeling does not include technologies that are not commercially active, Henbest noted.

The good news for renewables is they’re slated to get $7.4 trillion in new power plant investment between now and 2040. The bad news, from a climate perspective, is that’s still not enough to stave off 2 degrees Celsius of global temperature rise.

To stay in that climate range, which still might not be enough to prevent disruptive effects, will require a further $5.3 trillion investment in clean energy, the authors estimate. That amounts to 3.9 terawatts of additional zero-carbon capacity. It’s important to separate the metrics of clean energy industry success and the world population’s ability to maintain a livable environment.

Transportation produces 14 percent of global greenhouse gas emissions, so the 2-degree goal will require changes in that sector too. BNEF predicts electric vehicles will reach sticker-price parity with internal combustion engine cars around 2025, which will mark a key turning point in the adoption of that technology.

“The point at which these new technologies just undercut the existing technologies is just so near,” Henbest said. “Everything is moving fast enough that our conclusions need to be rethought every year, and this year arguably is the biggest rethink yet.”

That’s with a methodology that takes a business-as-usual approach, without assuming government efforts to hurry things along. Local and national policies to drive EV adoption or hasten the retirement of coal could feasibly accelerate the trajectory of emissions reductions. Conversely, policies that subsidize fossil fuels or block new technologies would slow clean-energy adoption compared to what a purely price-driven market would select.

Renewables companies have created an enviable pathway for growth based on pricing, the BNEF report finds. How they fare in the public policy battles ahead, though, is much less certain.