The Sustainable Renovation of the Regional Center for Renewable Energy

In April 2015 we moved to our new home that recently went under a sustainable renovation. The “Arava Renewable Energy And R&D Center”, Located in the regional compound opposite Kibbutz Yotvata. 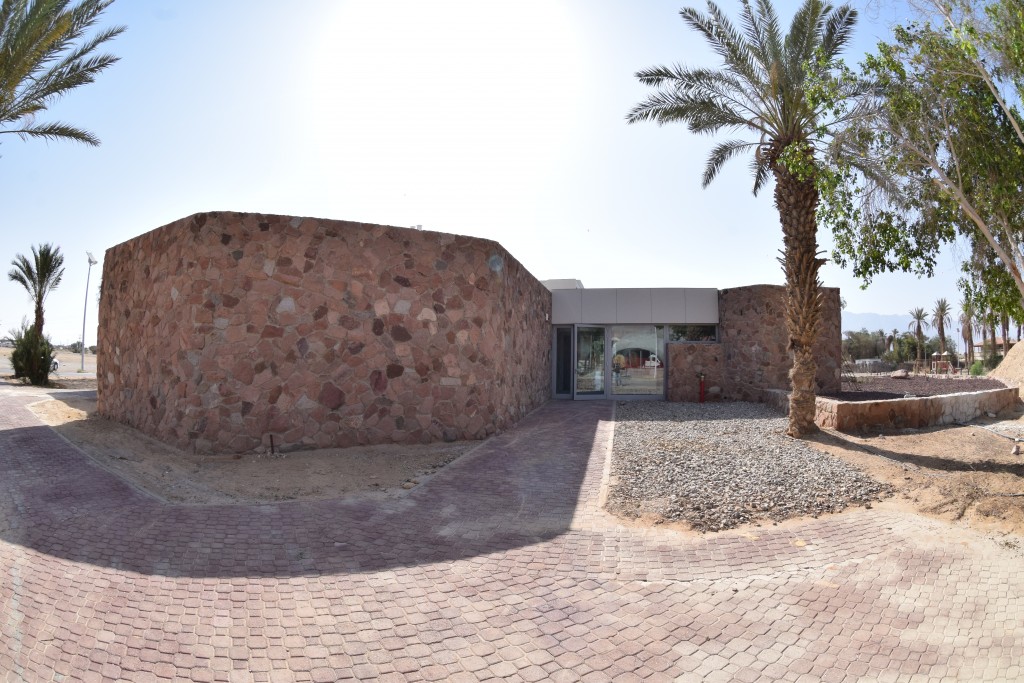 The building was constructed in the 1980’s by the Israel Nature and Parks Authority and was designed by architect Rafi Lehrman. It was originally used as a visitor’s center. After a relatively brief period it became obvious that it was not profitable and therefore the visitor’s center was closed. In the years afterwards, the building was re-purposed and used by the Regional Council as a community center for youth groups and other miscellaneous uses. Each new use led to operational changes until, during the 2000s, the building’s infrastructures collapsed.

The Eilat-Eilot Renewable Energy Initiative started out in the northern part of the building despite the poor condition of the infrastructures, and occupied four offices there. During the company’s early days a new vision was envisioned for the building – to serve as a home to all those involved in renewable energy and research in the Arava. The basis for this idea was the building’s physical proximity to the experimental fields of the Venture Capital technological incubator and the desire not to abandon buildings within the regional council’s jurisdiction.
At the beginning of the process a decision was made to renovate the building rather than to begin erecting a totally new structure. Although this step was more expensive it was more ecologically sound, because many building materials that cannot be recycled are simply thrown away or buried in the ground when an existing building is demolished.

In the first phase the sum of NIS 12 million was raised for the renovation. Donors were the Ministry for Regional Cooperation, UIA-Canada, JNF-USA, JNF-Australia, and the Hevel Eilot Regional Council.
The building was designed such that construction was executed in three stages:
1. Renovation of the existing building.
2. Expansion of around 706 meters (presently in the fundraising stage).
3. A third expansion of about 580 meters.
The entire construction and renovation process was carried out on the basis of Standard 5281 for green building, at the 2-star level.

We turned a dark, abandoned and neglected visitor’s center into a modern and well-lit building that presently has all of the infrastructures necessary for seven labs (some of them chemical labs), a meeting room, ten offices and a contemporary auditorium.

As originally designed the building was planned according to the lines of the property and was not oriented in a direction that was better suited, climatically speaking, to the Arava region. We utilized the future expansion, a bridge structure over the existing building, to give the building the shades and openings it needed. The future expansion crosses the building’s roof diagonally and orients the building in a north-south direction, which is the best orientation for construction in the Arava.
The original building had two main types of walls – concrete walls and walls made of granite stones. In order to make the insulation more efficient, we used a different method for each type of wall. The exposed concrete walls were covered with an average of about 10 cm. of foam, and this was cladded with panels of bright fiber cement. The granite stone walls were left exposed in order to preserve the character of the building and to integrate the old and the new. Although this stone is not the best from a climatic perspective, since it does have a tremendous thermal mass it was important to preserve the building’s existing and rare character (granite stones of the type used in this building are currently no longer used). Undoubtedly this decision led to a certain decline in the building’s insulation.

Due to specific needs of maintaining a constant temperature, in Lab No. 8 we added a plasterboard wall for interior insulation. The auditorium also has interior insulation because the metal that surrounds the wall provides internal thermal insulation.
The roofs were insulated with 15 cm. of foam onto which we place sealing sheets and white gravel using the “inverted roof” method.
Following a simulation of the natural light and heat, we chose the windows and doors, double-glazed, with an air pocket of about 16 mm. for insulation. Additionally, the outer doors and windows are all covered with Low E surfaces to protect against thermal radiation. Inside the double windows we added electric venetian blinds in order to provide exterior shade against the sunlight and to keep them from getting dirty from the desert dust. At the western entrance, where the sun hits full force most hours of the day, we created a double lobby with a passageway between two sets of doors, which reduces the temperature between the exterior and interior glass by 15 degrees Celsius.

As noted, in the design for Stage B and C the building will include a bridge that will serve as an additional rooftop to shade the roofs and will also create a wind tunnel to provide ventilation.

All lighting is based on LED bulbs based on the European standard. In the area of the lavatories and the kitchen where it was very dark we were unable to create window openings, so we installed natural lighting using optical sleeves from the Solatube Company, which transmit and diffuse the natural daylight.
For areas that do not get good natural light and require electrical lighting but are not visited by people on a regular basis (like the kitchenette), we have installed movement detectors that automatically turn the lights on and off.
Office doors are made of glass to enable light to come deep into the building, even into hallways without windows.

All electricity is control from a central controller and a centralized control system that can be operated from any computer or portable device. In this way the systems can be controlled throughout the day according to the users’ varying needs and without losing control (for example, if someone forgot to turn off the air conditioners).
Two switches were installed at the main exit from the building, one of which shuts off all of the lighting systems, and the other controls the air conditioning systems.

The entire building is accessible for the handicapped and disabled:
• For the two staircases we installed lifts, flat surfaces to lift up wheelchairs, mobility scooters or any other mobility device.
• Metal studs have been installed at the top of each stairway as a tactile indicator for the visually impaired that they are at the top of the stairway.
• Railings were installed along the staircases and inclined surfaces.
• All building openings (main entrances, rear entrance, office and lavatory doors) are wide enough to allow entrance by the disabled in accordance with accepted standards.
• The auditorium has amplifiers that are attached to earphones for the hearing impaired.
• There are accessible lavatories for the handicapped.

As in any sustainable renovation, we wished to remain loyal to our ecological values. We used the original terrazzo paving tiles. Where tiles were missing we made adjustments using new tiles.

In addition, where it was necessary to supplement the granite stones (for example, to raise the roof above the workshop), we used granite stones that were removed from the compound’s fences. This involved a great deal of long manual labor to remove the stones in such a way as to preserve them so they could be reused, thereby saving ourselves the need for new cladding stones. 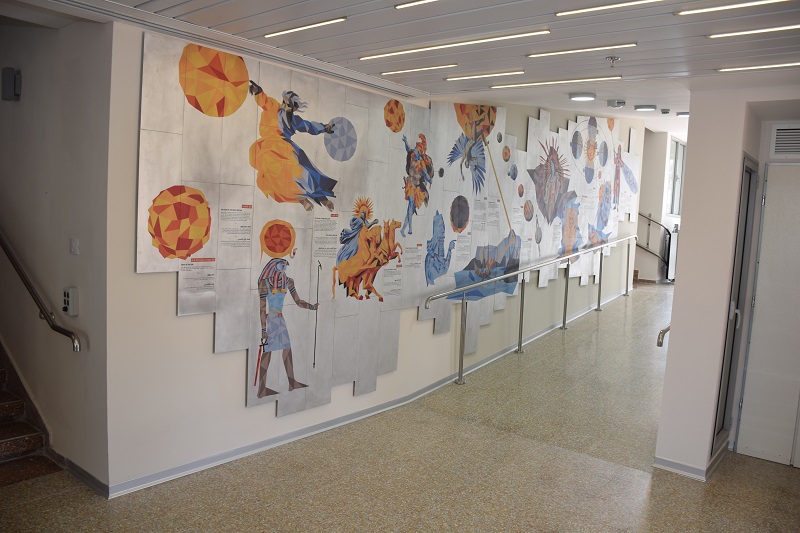 During tests we ran when the work was undertaken we discovered that the building is unfortunately located on top of a termite nest. Those familiar with this issue know that it is very difficult and nearly impossible to wipe out large termite nests, and the insecticides that are used are highly toxic to humans and the environment.

For ecological and economic reasons we decided to take a preventive approach. The main purpose was to keep the termites from wanting to tunnel into the building walls. We replaced the sand base beneath the floor tiles with a base of sesame seeds. The size of the sesame seeds keeps the termites from building nests and tunnels. Additionally, throughout the building (acoustic tiles, doors, thresholds, furniture) we did not use any wood or wood products.

Concomitantly, we engaged the Termitoos Company, which created for us feeding points outside the building. It should be noted that the material used was not harmful to the bee population (there are other substances which, it is claimed, could be a contributor to the reduction of recent years in the worldwide bee populations).

Around the building we are creating gardens of local desert flora that attracts bees and butterflies. 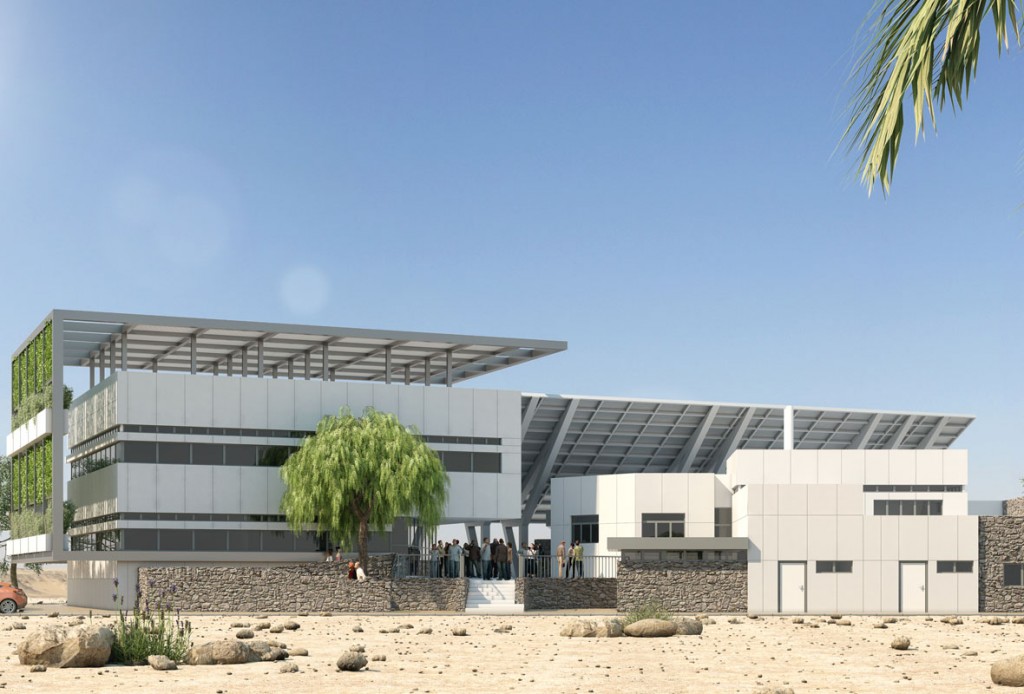